No details were overlooked in the making of Oceanus: Act One. Writer and Director Jeffrey Morris wanted to add a personal touch to the sub. Something that would exemplify the emotions and history of the characters. The locker on AquaShuttle Five contained images captured by photographer Bernie Wire of Megan Dodds and Sharif Atkins in a bright beach locale where they are together during better times. The purpose of this special element was for the sub to have a lived-in feeling. The memories in the locker are warm and happy.

The first photos were shot at on the pier at Venice Beach, CA. This was the first time Megan and Sharif actually met, so the chemistry caught on camera was real. The photos appear as if they were spontaneously captured by a friend during a sunny day at the beach. The memories in the photos make the movie feel even more real! The next photoshoot was inside of a science laboratory at Loyola-Marymount University. The images show Megan with lab equipment, where she really took on her role as Dr. Erin Kendall. She was able to portray a true and proud scientist in a real lab environment. 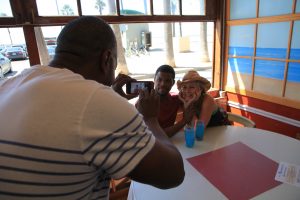 When explaining why he chose to combine memories of the beach with memories of the lab, Jeffrey stated, “I wanted to give a sense that Jordan respected his wife and her work and that it began long before they were undersea. I also wanted to give a sense that there was a history to their relationship and a past of happiness and interpersonal chemistry.” The locker meant a lot more than including a sentimental detail, it helped explain the character dynamics of Sam and Erin.

Jeffrey’s eye for detail really makes Oceanus stand out as a well thought-out movie that has some real meaning behind it. We know that with this attention to detail, the continuation, Oceanus: Odyssey One, is going to blow everyone out of the water!