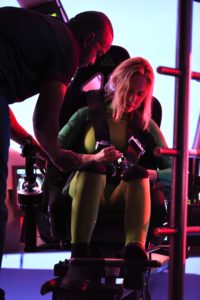 Aqua Shuttle 5 wasn’t only designed to look believable, but it was even built to be interactive, like a functioning sub! Writer and Director Jeffrey Morris designed the set of Oceanus: Act One to look as real as possible, this meant including a secret locker and genuine aircraft parts. The set had many details worked into its design, but the moving props on the set made the movie convincing.

Before the scenes were shot, Jeffrey introduced the cast to the functioning and moving elements on set. He had Sharif Atkins and Megan Dodds become comfortable inside the Aqua Shuttle, prior to performing on camera. They sat in the pilot’s seat, flipped the switches on the control panel, and manipulated the control stick. The 6-point seatbelt took some practice to effortlessly assemble and disassemble, but it didn’t take too long to master. 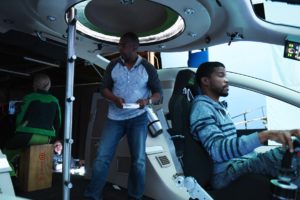 pilot’s seat. As an independent film company, a fully automated chair wasn’t in the budget. Instead, the seat was built on a track, which allowed it to be moved laterally and spun around. Because the cast didn’t control the movement of the seat, this effect also took time to perfect. Crew members crouched under the seat on set and slowly moved it along the track, keeping a steady and even pace. The effect on camera was an effortless glide, all seemingly controlled by the pilot.

The spectacular VFX, painstaking work of the crew, and Jeffrey’s foresight in having the cast get comfortable with the set before filming all contributed to this low-budget film being equal to or surpassing films with much higher budgets.