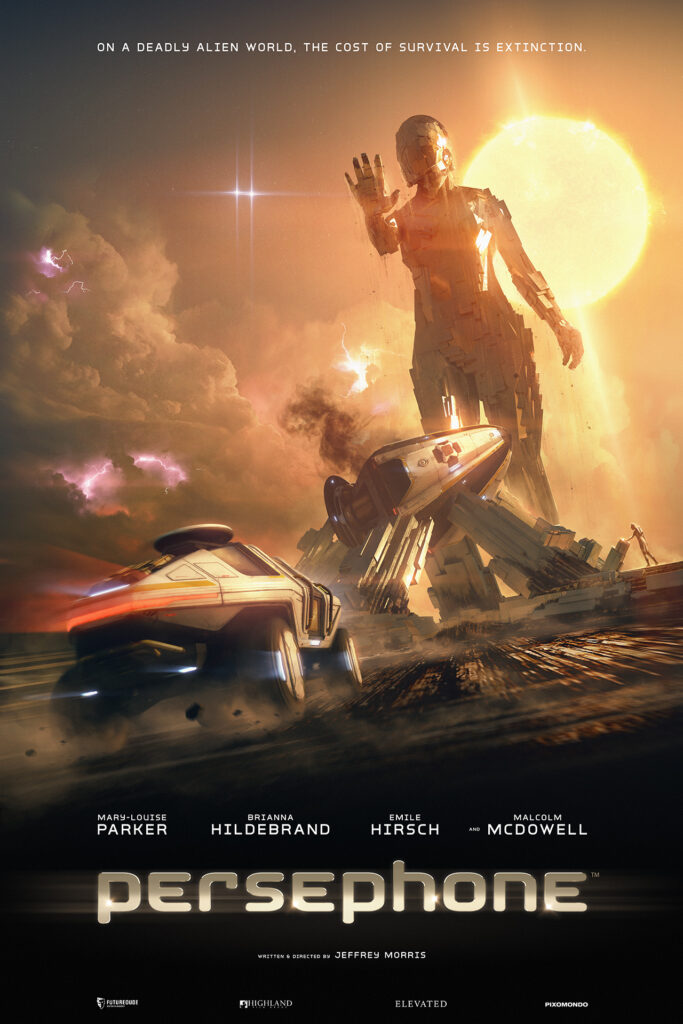 Morris, who created, wrote, produces and will direct Persephone, begins shooting in Utah in April 2021. The film stars Brianna Hildebrand of Deadpool, Mary Louise Parker, Emile Hirsch and Malcolm McDowell. Visual effects are being developed by Pixomondo in Canada (also an investor in the production) and the production will utilize the new LED Volume technology from the company Lux Machina — currently used by Disney+ in its Star Wars series The Mandalorian. Makinarium, based in London, began constructing sets, props and miniatures this week at Pinewood Studios which will be shipped to Utah for filming. International distribution of the film is being handled by Highland Film Group.

“Science fiction is a mirror, and sadly, Climate Change is a reality right now. Persephone is a movie that’s incredibly relevant,” said Persephone Creator, Executive Producer and Director Jeffrey Morris. “It’s a futuristic story that I hope will prompt questions about the damage we’re doing to the Earth and the dangerous implications for our future.”

Minnesota native Anne Marie Gillen who has spent several decades in the Los Angeles film industry is president of production for FutureDude Entertainment and serves as a producer on the film. Her projects have been nominated for Academy Awards, Golden Globes, Emmys, Independent Spirit Awards and DGA Awards. Between Gillen and Morris, they are proof that great entertainment can be developed outside of the confines of Hollywood.

A runaway Greenhouse Effect has occurred. Billions have died. The remnants of humanity are forced to look elsewhere for survival. Their target: the nearest star system to our own—the triple stars of Alpha Centauri. There, orbiting the red dwarf star Proxima Centauri, is PROXIMA B aka PERSEPHONE. The planet that can barely be called inhabitable, yet it exists in a so called ‘Goldilocks Zone’—the area near a star where a breathable atmosphere and liquid water can exist on its surface.

Persephone is the story of three astronauts from Colony One—an enormous space vessel traveling to the nearest star system. The trio have been dispatched in a shuttlecraft to repair a system designed to shield their new home of Proxima B (aka Persephone) from constant, deadly solar flares emitted by Proxima Centauri. The goal is to fix this shield at all costs as it’s the key to living on the surface.

However, an attempt to repair the shield from orbit fails, damaging their computer system. After crash-landing on the night side of the planet, the crew discovers that they may not be the only life on the hostile world. A mystery unfolds that may not only derail their mission, but also prevent the 20,000 colonists from ever setting foot on the planet.

What follows is an amazing journey that will carry the Colony One astronauts across the hostile landscape of Proxima B in search of clues to the greatest mystery humankind has ever faced. Persephone is an adventure that will determine the ultimate destiny of our species.

Persephone features a star-studded cast including:

Brianna Hildebrand (Deadpool) is Darcy Clarke, command pilot. She was born two decades into the journey and trained as a shuttle pilot. After crash landing, her skills are put to the test.

Mary Louise Parker (Weeds) is Tanya Baxter, systems engineer, who must repair a radiation shield that is essential to the colonization effort.

Emile Hirsch (Into the Wild) is Kyle Niven, astrophysicist who is working to unravel the mystery of giant formations on the surface of Proxima B that he believes they may be the work of an ancient alien race.

Malcolm McDowell (A Clockwork Orange) is the voice of OMNI an artificially-intelligent companion to the astronauts.

A Decade of Futuristic Storytelling

While Persephone is Morris’ first major motion picture film, he has been designing, writing, producing and directing for more than 30 years. Morris, who directed short films, commercials, music videos, and documentaries, wanted to develop intelligent futuristic, science-based action and adventure stories with the sensibility and influencers based on the golden age of science-fiction cinema in the 1960’s and 70’s.

Morris took the leap in 2010 and put a name to his dreams. FutureDude Entertainment was born, with its first offices on Grand Avenue in St. Paul. Morris now splits his time between his home-base in the Twin Cities and his various projects which take him all over the globe.

“As a kid I was fascinated by astronauts who walked on the moon or who blasted into space in rockets. A decade ago, I founded FutureDude Entertainment with the vision of creating that same feeling of awe for audiences through print, film and television,” said Morris. “Today I could not be more proud of what we’ve achieved and will achieve. FutureDude Entertainment is capturing the leading edge of science and the furthest reaches of human creativity. We are telling stories that spark the imagination, move our hearts, and inspire us to think about what’s possible.”

As a child, Morris was inspired by Star Trek and Space: 1999 and became a devoted science aficionado, focusing on space exploration, oceanography and meteorology. FutureDude Entertainment is the unification of his interests, manifesting in entrepreneurship, art direction, science education and interactive media.

In addition to Persephone, FutureDude Entertainment is bringing its popular Parallel Man illustrated comic series to the small screen and console gaming. Morris is in discussions with Epic Games to utilize Unreal Engine technology and hopes to announce a production date by mid-2021.  Parallel Man is about a rogue agent fighting to prevent an evil version of the American government­, on an alternate Earth, from enslaving citizens throughout the multiverse.

Morris is also in discussions with Highland Film Group to produce and direct his action-packed time-travel epic, Parallax. Co-written by Fredrick Haugen, Parallax is set in contemporary times against a backdrop of corporate espionage and tragic romance. This feature film is on the docket for Morris after Persephone is completed in late 2021.

Morris is also in discussions to bring his short film Oceanus to the Chinese marketplace as feature-length film.

I strongly believe this will be the first of many films that will rekindle the science in science-fiction. Our younger generations deserve to be just as enchanted, enthralled and enthusiastically entertained as we baby boomers were growing up.
Movies such as 2001: A Space Odyssey, Star Trek the Motion Picture and Close Encounters of the Third Kind sparked a passionate curiosity in what lies beyond the confines of this planet.
FutureDude Entertainment is on track to create a new wave of excitement in the disciplines of aeronautics, astronautics, astronomy, atmospheric sciences, biology, ceramics, chemistry, computer science, planetary science, geology, geophysics, mathematics, mechanics, metallurgy, meteorology, oceanography, physics and space science to name a few.
Bravo for taking one small step in entertainment that can possibly lead to one giant leap for scientific endeavors!

This site uses Akismet to reduce spam. Learn how your comment data is processed.